Maxigas published a paper in the journal Social Studies of Science:

I offer an interpretation of hackers’ technological choices through a theoretical framework of critique and recuperation in technological cycles, building on prior research that brings the pragmatic sociology of Boltanski and Chiapello to bear on matters in Science and Technology Studies. I argue that contextualizing technology choices in the development of capitalism through innovation illuminates their political significance. I start with the counterintuitive observation that some browser extensions popular with hackers, like RequestPolicy, make it considerably harder for them to look at websites. This observation showcases the Luddite aspects of hackerdom, in that they are willing to ‘break’ popular websites that would otherwise cheat on the user. In line with an undercurrent of hacker studies, in this case study I find hackers fighting technological progress they see as social decline.

Maxigas presented at the annual conference of Freenode, the chat network serving “peer directed projects”. The conference was the first of its kind and drew around a hundred participants at We The Curious in Bristol, UK, over the weekend of October, 28-29, 2017. The talk was recorded and should be available in the future. Maxigas also made interviews with IRC users, operators and developers for his ongoing research on the social history and contemporary use of the Internet Relay Chat protocolHere is the abstract:

This talk is an attempt to take a long durée view of challenges to IRC in the context of the changing technology landscape and its political economy, with a conclusion that addresses the burning question of the day.

IRC manifests a basic human desire to chat, hang out and collaborate in an informal manner. However, these activities have not always been valued too high by managers and gatekeepers of IP networks. At other times, they have been perceived as the potential basis for lucrative business models. Therefore, IRC communities and operators met various challenges through the history of the technology, ranging from outright ban to corporate takeover. Social conflicts unfolded in close interaction with industry actors, where sometimes users even reclaimed resources from employers. However, the very meaning and consequences of peer directed projects also shifted with the reorganisation of production during the latest decades of late capitalism.

Nonetheless, the story of IRC is an outstanding example of the self-organisation and self-management of users, showing how norms of organising and managing infrastructures prevalent in the early days of the Internet could persist through increasingly hostile historical circumstances.

When people take technology in their own hands: Shared Machine Shops in Context

Shared Machine Shops – hacklabs, hackerspaces, makerspaces, Fab Labs, incubators and accelerators, medialabs and tech shops – have been widely studied as so many variations on the same theme: for instance as strange institutions performing the democratisation of innovation through the involvement of non-experts. Building on the results of multi-sited ethnographic research, in this workshop we take a more methodologically nuanced and empirically rigorous approach. It turns out that even if SMSs all provide access to machines for non-experts, their social functions can vary greatly according to how they integrate into the social fabric. In other words, the “lab format” is mobilised by a wide range of social groups (often simultaneously) for different ends and with varying results. Thus, the aim of the workshop is to explore the diversity of Shared Machine Shops and explain such diversity through situating the phenomena in its temporal, spatial, economic and ideological context.

16:40 – 17:00 Rosen Bogdanov (OSI/Mediaccions). Do-it-together science and platforms for public participation: Can biohacking be legitimising synthetic biology in the EU?

The role of networks in the social sciences

Networks have been studied since the beginning of the social sciences (by Malinowsky, Simmel, Moreno, etc.), particularly in anthropology where they have been a major tool for understanding kinship as the basis of social relations and cultural paradigms. Yet, the second part of the twentieth century saw the network model emerging as a major contender for understanding society sociologically (Barabássi) — so much so, that Actor-Network Theory famously sought to replace the very notion of society with networks, and sociology with their study (Latour’s claim). Today, network analysis can be used to attack any problem or sphere of life whatsoever. The triumphant advance of networks have been tightly coupled with the inspiring imaginative and efficient practical development and application of Information and Communication Technologies. Indeed, computerisation mediates social life as such through material and conceptual networks.

The seminar aims to take up such a two-pronged idea of “networkisaton” — in social life in general, and the social sciences in particular — as an object of reflection in itself. While network methods have been seized upon with great enthusiasm by scholars across diverse fields, analysing their role as a social ontology is often lost in the flurry of practical results. A telling symptom is that methodological textbooks on the topic often come without a historical exposé of the field. Addressing such amnesia may help to re-invigorate knowledge production on and about both society and networks.

Departing from past and current debates on scalar and network politics in geography, this presentation explores how by reducing social space to network forms, current theories of networks do not allow to explain the actual existing geographies of internet driven capitalism and its alternatives.

17:40 – 18:00 Antonio Calleja-López (CNSC). Constructing and deconstructing networks: Scattered thoughts on the ontologies of the social

“Network” is a term that has been used to name or qualify an age, a type of society, a social form, a form of association, concrete technologies, a new science, an STS theory, a set of methods, a visualization paradigm, a conceptual vocabulary, and more. In this intervention I attend to some key contemporary discourses and practices around “networks” and discuss aspects of the ontologies underlying, or emerging from, them.

Maxigas spoke on the “Emergent features of old new media: The case of IRC backlogs” at the Politics of Disconnection and Disruptive Media (Disconnect!) workshop organised by Anne Kaun at Södertörn University, December 12, 2016.

The full text of the presentation and the corresponding slides are available online. The talk text will be reworked for publication based on the feedback from the workshop. It will appear in Spring 2017 in the second edited volume on Technological Sovereignty edited by Alex Haché and published by Ritimo Foundation in English, French and Spanish. 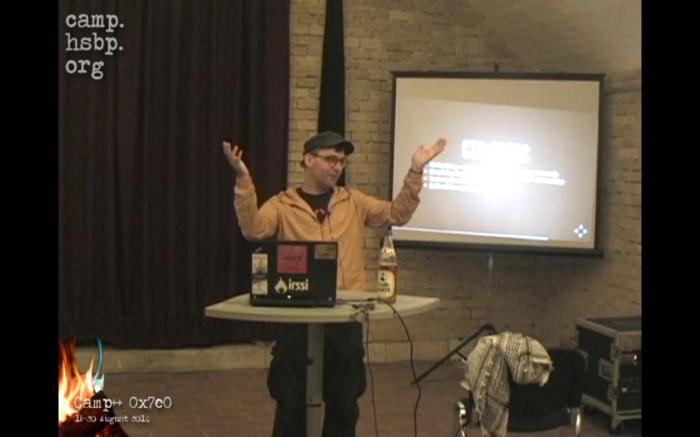 The Hungarian Autonomous Center for Knowledge (H.A.C.K.) hackerspace in Budapest organised its annual hacker camp called Camp++ at Fortmonostor, on the Hungarian-Slovakian border on the banks of the Danube. Maxigas presented on “What is critical technology appropriation?”, introducing and combining concepts from Science and Technology Studies, pragmatic sociology and the history of technology, taking the case of Internet Relay Chat as a starting point. As a staple of Maxigas presentations, the critical stances of the Amish and the Luddites against capitalist, modern and liberal uses of technology have also been discussed. The aim of the presentation was to disseminate research results to practitioners, exchange ideas and experiences, and mutually shape an informed, critical, radical taste in technology choices. Here is the abstract from the conference program:

New technologies sometimes express a critique of the existing social conditions. However, their subsequent iterations often increasingly conform to the requirements of capitalism: capital accumulation (exploitation) and social peace (repression). The history of chat devices is no exception. Critical appropriation of IRC by contemporary peer production groups show how it is possible to resist such historical logic.

The talk is comprised of three parts.

First, I go over the history of technologically mediated chat, and propose a rough periodisation: chat programs, instant messaging applications, and social networking. I argue that the history of chat devices is a textbook example of recuperation.

Second, I talk about the contemporary use of IRC as a backstage infrastructure by peer production communities: free software developers, hackerspace members, (Anonymous) hacktivists and Wikipedia editors. I highlight the functional role that IRC in general plays in the contemporary media ecology, a technological landscape where social networking takes up most of the space. At the same time I also list some particular ways in which these different user groups appropriated the medium for their own ends.

Third, I draw the theoretical conclusion from these empirical details, answering the following question: what is critical technology appropriation, why is it important, and which conditions make it possible? I close the presentation with some reflections on the political meaning of the rejection of new technologies and the continued use of old technologies, in light of current proposals for decentralised and distributed communication tools.

The camp also included a traditional Sardine Tasting event in the spirit of sharing, seen below.

Maxigas convened a track with Adrian Smith and Johan Söderberg at the annual international meeting of the Society for the Social Studies of Science and the European Association for the Study of Science and Technology (4S/EASST), September 2016. The track attracted 25 abstracts and culminated in 10 presentations spread over two sessions. A report of the track by Yana Boeva and Bruno Chies is forthcoming in the next issue of the EASST Review. The track was announced in a blog post on the 4S website and other blogs. The outcome is a special issue of the Journal of Peer Production based on the track material and edited by convenor Adrian Smith and presenter Kat Braybrooke. The special issue is scheduled for early 2018.